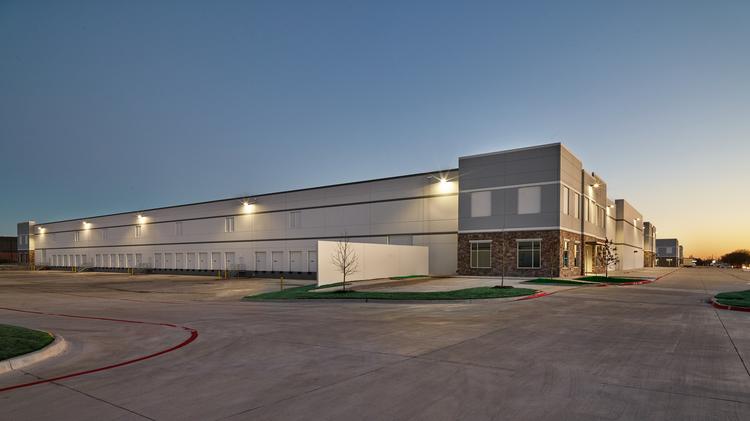 A photograph of the Jupiter Miller Business Center in Garland, Texas, which ended up being completed a couple of months sooner than anticipated despite significant changes to the original plans.
PHOTO COURTESY OF BOB MOORE CONSTRUCTION

Changes are common in construction. But starting with plans for two buildings only to be told by government officials to switch to constructing three would threaten the delivery of any project.

That’s what happened with Jupiter Miller Business Center in Garland, Texas though. The project, in which more than 1 million square feet of obsolete facilities had to be demolished or repurposed, was essentially set back to the beginning.

The project’s designer, Alliance Architects, Inc. had to stop in mid-design and redo the plan when city officials and project leaders noted the dock doors faced the main street in front of the property in the original design. They decided on a re-design so the dock and truck areas would not face the street, which would give the finished project a more appealing “front door” image, said Carlos DeSaracho, principal at Alliance Architects.

Also, in working with the project’s owner, Flaherty Development, and the contractor, Bob Moore Construction, it was decided three buildings would sit comfortably on the site and be more cost-effective than the two buildings that were included in the original design, DeSaracho said.

Fortunately, the business park, which was an infill development on the site of a former Raytheon manufacturing facility, had been set up as a design-build project from the start, and work on both of those major phases – designing and building – was being done concurrently. Flaherty Development had decided to do the project as a design-build due to time and cost constraints. That decision paid off because Alliance Architects was able to receive cost and time feedback from Bob Moore Construction as the architects worked on the design.

As the architectural team progressed through the design and drawings, they provided Bob Moore Construction with progress drawings and information they in turn reviewed and provided comments on for the design team. As it turned out, with the change in building layout, that exchange of information allowed the project team to quickly understand the three-building layout would work for the former Raytheon site, DeSaracho said.

Design-build is the nation’s fastest-growing and most popular project delivery method, largely because the owner manages only one contract with a single point of responsibility, according to the Design-Build Institute of America (DBIA). Any changes are addressed by the entire team (owner, designer and contractor), which leads to collaborative problem-solving and innovation. Spending in the design-build market was estimated to increase 18% from 2018 to 2021 and exceed $320 billion – representing up to 44% of construction spending, according to the DBIA.

DBIA research shows that design-build provides the following advantages over the traditional project delivery method that takes a design-bid-build approach where an owner manages the designer and the contractor under separate contracts.

According to DBIA, compared to design-bid-build, design-build projects:

“There’s a unified approach in design-build projects,” said Mark Duvall, vice president, pre-construction services, Bob Moore Construction. “Everyone works together as a team in lieu of an adversarial nature that can occur in design-bid-build.”

Developer VanTrust Real Estate, LLC looks for strong relationships between contractors and architects when doing design-build projects, said Jim Kehoe, vice president, development services. “In the design-build world, they’re creating the plans and filling in holes in the plan and closing scope gaps together, so we have to make sure they’re experienced and skilled in this process.”

VanTrust has used design-build for all of its projects since 1996. Its current projects include the Fort Worth Logistics Hub, a 1.2 million-square-foot business park that Bob Moore Construction is building on 75 acres South of I-20 near I-35W. The first building, which will have more than 670,000 square feet of space, is scheduled to open this summer.

“The big advantage is speed to market. That’s critical for a developer,” Kehoe said. “If my project is the first one available, then I get first shot at landing tenants. And with design-build, we get a better project.”

Duvall cited a 100,000-square-foot manufacturing facility for Steri-Tek that Bob Moore Construction is building in Lewisville, Texas as an example of how the efficiencies of a design-build project can help owners.

In working with project designer Meinhardt & Associates Architects early, Bob Moore Construction helped identify the most suitable materials to use in building the custom manufacturing facility. Bob Moore Construction analyzed the costs of three different options before recommending the use of poured-in-place concrete bunkers for the sterilization of medical products.

“They could have picked a different form of concrete and it would have cost the customer more than it should have,” Duvall said. “Contractors are good at building and at pricing items, and when you team them up with designers you can design the most economical way to build a project.”

A 2018 design-build study by management consulting firm FMI showed that project owners rated design-build highest across all project delivery methods, with 76% reporting very good or excellent experiences. “Opportunities to innovate and the ability to fast-track a project were identified as top benefits associated with design-build. Cumulatively, these projects allowed for greater opportunity to provide project innovations and subsequent cost savings,” researchers wrote.

“Design-build makes more sense as a developer because it allows me to do more projects with more bandwidth,” said Kehoe, who was a general contractor for almost 20 years before moving to the development side. “As an owner, design-build is the only way to go.”

Contact Bob Moore Construction to discuss partnering on the construction needs for your next industrial project.

Bob Moore Construction started in 1946 and is one of the largest commercial general contractors in Dallas, Fort Worth and all of Texas. It has delivered commercial construction projects in Texas and around the United States. The company is an industry leader in tilt-up construction.

Jim Molis is a freelance writer with The Business Journals Content Studio.